Walking or Jogging alone at any time of the day can be dangerous. Today 4/22/13 a fourteen year old young man was jogging in his own neighborhood when a van pulled up and a man jumped out and grabbed him.

The young man fought back and got away from his abductor. He ran home and called the police. He gave a detailed description of the attacker and the vehicle he was in.

This is exactly how these stories should end, but many times they end in a much more tragic way. In this situation this young man was strong enough to fight and get away. If this had been a younger runner or anyone who was caught off guard they may not have been strong enough to fight off the abductor and ended up in the van.

Once that happens you have no idea what will become of your life or if you will even live. As crazy as it sounds, a young male or female can face rape, torture, murder or even being traded over seas as slaves.

The most important thing you can do if someone tries to grab you is fight for your life and get away!

You have no idea what will happen if they get you in a van or inside a building. Anywhere out of sight is bad news. Your best chance of survival is to fight like you are fighting for you life…? because you just might be. 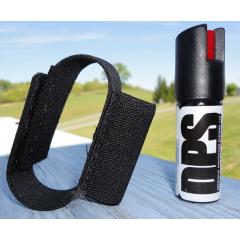 Another thing you can do to make you walk or your run a little safer is carry a pepper spray. DPS makes a walker/jogger armband pepper spray that is so small you hardly know you are wearing it. The nice part about the small defense spray is it gives you serious protection against attackers or abductors as well as dogs which are a constant threat for walkers. This is the same exact defense spray carried by hundreds of agencies in the US.

For more information see our DPS Pepper Spray section on our site.