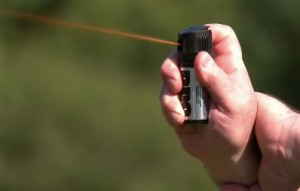 Nothing like a little hot pepper to go with your hot peppers!

A seldom heard of, but not so uncommon thing happened on December 12th in Ardmore Oklahoma when a police officer’s pepper spray discharged while he was having lunch. The officer was enjoying some local Mexican cuisine at the El Tapatio restaurant when his pepper spray malfunctioned.

The fire department and ambulance crews were called in to ventilate the building and to treat anyone who may have been affected.

There are several reasons this type of thing can happen. Faulty valve, deteriorated seal, something getting wedged into the pepper spray carrier and depressing the actuator or even a hole wearing in the can from constantly spinning and moving. Many leather pepper spray holders do not hold then can tightly so the cans tend to move around and because they are made of thin aluminum a hole can be rubbed into the can over long periods of time.

Officers who seldom use pepper spray or never pull out their can to inspect it are more likely to have this happen. I have seen this first hand when an officer friend of mine wore a pinhole into the can and it discharged in his cruiser and leaking all down his pants. He had to go shower and change because the pepper burned his leg like a severe sunburn.

Most accidental discharges can be avoided by using caution. With keychain units, make sure your safety is on every time you handle the unit. For larger duty size units, make sure the can is not worn to where the label or paint has wore off in the holster, and finally make sure you don’t put it somewhere carelessly where something can be accidentally wedged into the actuator and fire the unit. It can make a nice night out into an embarrassing and potentially costly evening if you cause a business to shut down.

Pepper spray is a great self defense tool but it must be handled with care to avoid accidents. 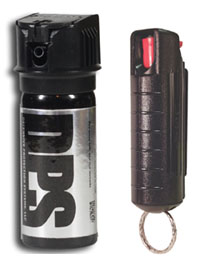 We offer a full line of pepper spray models with some type of safety feature to prevent accidental firing.