Carrying Pepper Spray In Your Vehicle For Self Defense 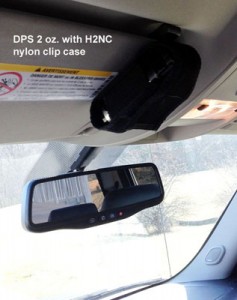 Carrying pepper spray in your vehicle could just save your life.

I decided to make my first blog post about carrying pepper spray in your vehicle after reading this article: Women encouraged to practice self-defense after string of sex assaults in Lakewood

In short there is a guy who has been running his car into the car of the victim. When the woman gets our to check for damage he assaults them. This intentional bumping of the vehicle is an old trick. It pretty much forces people to get out and inspect for damage. I can tell you, if you need to get out of your car after an event like this you should have a pepper spray in your hand just in case.
Even if the person is not intending to assault you they still might be very upset that they hit you. Maybe they will loose their insurance, or maybe they don’t have any insurance and will be arrested for it when the police arrive. It’s a good idea to be prepared just in case.
This is why my wife, my daughter and myself all carry DPS Pepper spray in our vehicles. The stuff is brutal and you can keep your distance. Self defense hands on training is highly recommended but not everyone can handle it and you really don’t want to get that close if you can help it.

I keep my DPS clipped right on my visor as shown above. It can be easily grabbed in an emergency and you don’t need to look for it.
Most people put their defense spray in the console or glove box but there is no time to access them when a situation arises. Pepper spray does you no good at all if you can’t reach it in an emergency. It is much better to have the pepper spray at your fingertips. If the bad guy tries to force you back into your car you reach right up and grab the spray and blast him.

It also helps to have a defense spray handy if a road rage incident presents itself. You could be sitting a red light and a very angry guy tries to pull you out of your car. You don’t have to think about it, the spray is right there over your head.
Pepper is safe in the car as long as it is not in direct sunlight. Meaning never leave it on the dash or on the seat because if it gets hot enough it will explode.

Remember, self defense training and the carrying self defense weapons such as pepper spray are for “just in case” situations. Hopefully you never need to use what you learned or what you are carrying against a bad guy but it is way better to be prepared should a bad situation surprise you.

For more information please visit the pepper spray section of our site.

Clerk Turns the Table on Robber with Pepper Spray

I love to hear stories like this where the bad gets hammered with a less lethal item like pepper sprayand his robbery is foiled. This clerk had no idea this guy did not have a gun. Furthermore the way things are now, you cannot assume the robber won’t attempt to harm or kill you once [...]

When Not To Use Pepper Spray

When should you not use pepper spray?Pepper spray is an excellent self defense weapon when used properly, but there are times when pepper spray or any use of force should not be used. This video is one of those times.January 23 2013 three protesters were pepper sprayed by guard at an abortion clinic in Jackson [...]

Why Do Officers Carry Pepper Spray And Taser's?

Did you ever wonder why officers carry pepper spray and Taser’s as part of their duty gear?In short…Because they work! I just came from a graduation at West Virginia University. My friend Kyle Baxter just completed his 4 year degree. His main area of study was criminal justice. He is beginning his working career with a [...]

POLICE PEPPER SPRAY GOES OFF IN ARDMORE RESTAURANTNothing like a little hot pepper to go with your hot peppers!A seldom heard of, but not so uncommon thing happened on December 12th in Ardmore Oklahoma when a police officer’s pepper spray discharged while he was having lunch. The officer was enjoying some local Mexican cuisine at [...]