When should you not use pepper spray?

Pepper spray is an excellent self defense weapon when used properly, but there are times when pepper spray or any use of force should not be used. This video is one of those times.

January 23 2013 three protesters were pepper sprayed by guard at an abortion clinic in Jackson Mississippi There were protesters from both sides of the abortion issue demonstrating. This is and always will be a very heated issue and tensions run high. 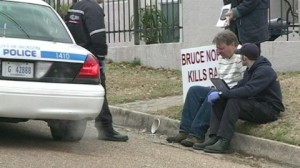 The problem with the use of force here is it was not called for in my opinion. The guard does not appear to be in fear and clearly when he backs up inside the fence and then comes back out to spray the people he was being the aggressor In my opinion he assaulted those people even though they were yelling he did not have a right to spray them.

Pepper spray should only be used in 2 circumstances.

1. If you are in fear of assault or injury you have a right to protect yourself. Only then can you spray some one with pepper spray to stop the assault. The same goes for aggressive animals. You can spray and animal to defense yourself if you are in fear but you would not want to spray an animal behind a fence just because he was barking. It is cruel and in humane and could also lead to charges.

There is no nice way to spray someone. If you use it, it had better be for the right reasons. Using pepper spray on someone because you are angry or upset with then is assault.